Sorry, I see only one stupid 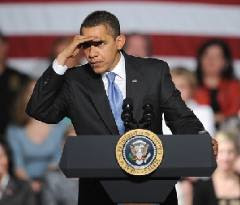 Why did you go there? You're giving a presser on your rapidly failing health-care initiative and then you turn to this incident.

Was it to divert attention away from the trouble the health-care plan? Was it a bit of racism on your part?

Is there racial profiling by the police? Yes. Is it something that communities need to address? Yes. Is it your business to insert yourself into this local matter in which, even yourself said you don't know the facts? No.

You're the President of the United States, not its king. This was a local matter, except to the possible extent that the man was a friend of yours, as you say.

You also said you don't know the details of what happened but that didn't stop you from calling the policeman's actions stupid.

BOSTON (AP) -- Many police officers across the country have a message for President Barack Obama: Get all the facts before criticizing one of our own. Obama's public criticism that Cambridge officers "acted stupidly" when they arrested black Harvard professor Henry Louis Gates Jr. could make it harder for police to work with people of color, some officers said Thursday.

It could even set back the progress in race relations that helped Obama become the nation's first African-American president, they said.

Gates was arrested July 16 by Sgt. James Crowley, who was first to respond to the home the renowned black scholar rents from Harvard, after a woman reported seeing two black men trying to force open the front door. Gates said he had to shove the door open because it was jammed.

He was charged with disorderly conduct after police said he yelled at the white officer, accused him of racial bias and refused to calm down after Crowley demanded Gates show him identification to prove he lived in the home. The charge was dropped Tuesday, but Gates has demanded an apology, calling his arrest a case of racial profiling.

Obama was asked about Gates' arrest at the end of a nationally televised news conference on health care Wednesday night and began his response by saying Gates was a friend and he didn't have all the facts.

"But I think it's fair to say, No. 1, any of us would be pretty angry," Obama said. "No. 2, that the Cambridge police acted stupidly in arresting somebody when there was already proof that they were in their own home. And No. 3 - what I think we know separate and apart from this incident - is that there is a long history in this country of African-Americans and Latinos being stopped by law enforcement disproportionately, and that's just a fact."

On Thursday, the White House tried to calm the hubbub over Obama's comments by saying Obama was not calling the officer stupid. Spokesman Robert Gibbs said Obama felt that "at a certain point the situation got far out of hand" at Gates' home.

Crowley said he still supports the president, who attended Harvard Law School in Cambridge and garnered 88 percent of the vote there in last year's presidential election.

"I think he was way off base wading into a local issue without knowing all the facts as he himself stated before he made that comment," Crowley told WBZ-AM.

"My reponse is that this department is deeply pained," Haas said at a news conference Thursday. "It takes its professional pride seriously."

Fellow law enforcement officers across the country sided with Crowley.

"To make the remark about 'stupidly' is maybe not the right adverb," said Santa Monica, Calif., police Sgt. Jay Trisler, who has been in law enforcement for 24 years. "When an incident occurs with a police department, we're not quick to judge."

He lamented negative opinions being directed at police.

"It's unfortunate because there are so many other police cases where an elected official has made a comment that wasn't correct, comments that could have been better worded," he said. "Look at Rodney King. It's a high-profile case, and everyone is entitled to an opinion."

"By reducing all contact between law enforcement and the public to the color of their skin or ethnicity is, in fact, counterproductive to improving relationships," Preston said. "To make such an off-handed comment about a subject without benefit of the facts, in such a public forum, hurts police/community relations and is a setback to all of the years of progress."

Other officers credited the president with using Gates' arrest to highlight the ongoing national problem of racial profiling.

"It wouldn't make any difference whether it was Barack Obama or John McCain. It's appropriate that the leader of this country should still recognize there are still issues in this country in regards to race," said Lt. Charles Wilson, chairman of the National Association of Black Law Enforcement Officers Inc. and a 38-year veteran of law enforcement. "This is an issue that occurs in every single place in this country, so it is not a local issue."

Trisler said Obama's remarks ultimately would not affect how police officers do their jobs. Police have weathered problems before - from the King beating to local corruption cases - and still find ways to work with their communities.