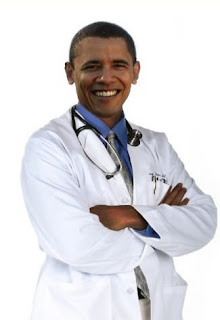 Its not about the process??

Its only about results??

Is this why Congress keeps passing dang bills they don't read? Is this so they can say at the end look what we passed and got done?

Even if what they did is crap? This has worked out really swell hasn't it. The economy is booming, job losses declining, banks are loaning money, GM and Chrysler are building cars folks want.

Let the process work and give us the best bill possible for cryin' out loud. Don't start screaming, once again, pass it right away.

“Ultimately, this is not about a process, it’s about results,” David Axelrod, Obama’s senior political strategist, said during an interview in his White House office. “If we’re going to get this thing done, obviously time is a-wasting.”

“We’d like to do it with the votes of members of both parties,” Axelrod said. “But the worst result would be to not get health-care reform done.” (Does this mean even if its a piece of crap?)

House Democrats today unveiled legislation totaling about $1 trillion that would expand health care to millions of Americans over the next decade by raising taxes on the wealthiest households. The Senate has yet to agree on a bill as Democratic lawmakers struggle to get Republican support.

Emanuel, making a theoretical case for a party-line vote, offered a definition of bipartisanship based not on roll-call votes but on whether Democrats have accepted Republican ideas during the process of negotiations.

And he said Democrats already have passed that test, pointing to Republican amendments that the Democratic-controlled Senate Health, Education, Labor and Pensions Committee has adopted.

“That’s a test of bipartisanship -- whether you took ideas from both parties,” Emanuel said. “At the end of the day, the test isn’t whether they voted for it,” he said, referring to Republicans. “The test is whether the final product represented some of their ideas. And I think it will.”

Analysts and some veteran political practitioners have inveighed against a partisan approach on such a contentious issue.

They include two former Senate majority leaders -- Robert Dole, a Republican, and Tom Daschle, a Democrat, who is a close White House adviser on health-care issues.

During a joint appearance in June as the two unveiled their own bipartisan health-care proposal, Dole said he believed Democrats could pass a bill by a party-line vote, even as he expressed disapproval of such a tactic.

“I hope it doesn’t come to that,” Dole said. “If there’s not a Senate Republican vote for the package, then the American people are going to be very skeptical.”

The Democrats have 60 votes in the Senate to 40 for the Republicans, and have a 255-178 advantage in the House, with two vacancies.

Daschle said he “couldn’t agree more” with Dole’s warning about the political fallout from a partisan vote.

Moreover, he expressed doubt that Democrats alone could prevail, because that scenario “assumes unanimity” he said, and that isn’t the case.

Time is running short for the House and Senate to pass the legislation before their August recess, the deadline Obama has set. In entertaining the possibility of a party-line vote on health care, Emanuel cited “reconciliation,” a parliamentary procedure that a dominant party can use to prevent the other party from blocking legislation.

Yet reconciliation “exists as an alternative vehicle, Emanuel said. “That’s what it was created for.”

With time running out, some Democrats have urged Obama to get more deeply involved in the nitty-gritty legislative negotiations.

Axelrod said the president is likely to do that.

“I can’t guarantee whether his sleeves will be rolled up or not,” he said. “Obviously, as this process evolves, I think he will be very clear about things.”

The White House and Congress are trying to agree on ways to cover the estimated 46 million uninsured Americans and rein in health-care costs.