Put down the phone and take a step back 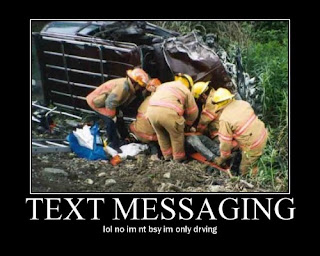 Many years ago I was stopped for construction on I-10 as traffic backed up. I got rear ended about 15 seconds or so after stopping by a driver talking on his cell phone. After bouncing between his car, the car in front of me and then his car again, I had gotten knocked unconscious.

How did I know he had been on the phone? I looked in my rear view mirror as he came around the curve in the road and saw him with a phone to his ear.

Hospital etc. the usual stuff, and several years later still back and neck pains from the herniated discs in neck and back.

Get off the phone and drive also DO NOT TEXT, JEEZE!!

The dangers of texting
By Theron Brittain - The Herald-Zeitung

Marissa Kirsh doesn’t have her license yet.

The 15-year-old does have a cell phone, and her dad has made it clear that when she does get that license in December, she is not to be texting while driving.

“I told her not to do it; she is not even allowed to talk on the phone while she's driving,” said Gary Kirsh, who accompanied Marissa Wednesday morning to the Texas Department of Public Safety office to get a replacement for a lost permit. “She is to pull over or wait until she gets to her destination.”

That logic is also pushing legislation on Capitol Hill, and prompted Democratic lawmakers to call Wednesday for a nationwide ban on texting while driving.

The “ALERT Drivers” Act would require states to bar the sending of text or e-mail messages while operating a vehicle, according to a press release issued by Robert Menendez (D-N.J.), who is sponsoring the bill with the support of Democratic senators Charles Schumer of New York, Mary Landrieu of Louisiana, and Kay Hagan of North Carolina.

The act also would withhold federal highway money from states that do not comply within two years of the bill's passage.

“Texting while driving should be illegal on every road, every railway, in every state,” said Menendez in the release. “iPhones, Sidekicks and Blackberries are indispensable devices, but while they make our lives so much easier, the make driving that much harder.”

The motivating factor for the legislation lies within a Virginia Tech Transportation Institute study released yesterday. The study found operators of motor vehicles had a collision risk 23 times greater when they where texting. Additionally, the American Medical Association declared texting while driving is a public health risk, saying the activity causes a 400 percent increase in time spent looking away from the road, according to the release.

Melanie Mooney, a public relations senior at Texas State University in San Marcos, said though she texts while driving, she understands the dangers involved and has tried to limit her usage.

“I've actually cut back since I moved to San Marcos because of all the bicyclists and pedestrians,” she said. “I don't think the government should withhold highway funds as a penalty for states that do not comply, but I can see how a law, if enforced, could be a useful deterrent.”

Within six months of the bill's passage, states would have two years to comply or risk losing 25 percent of their annual highway funding each year, according to the release.

Local police officials acknowledged the hazards of texting while driving, saying anything that takes a driver's eyes off the road increases the potential for accidents.

“We encourage our driving public to take all the precautions they can to prevent accidents,” New Braunfels Police Chief Ron Everett said in response to the legislation. “We will support any effort that improves the safety of drivers.”

“Texting diverts your attention from possible road hazards or traffic conditions that may put you in a position where your attention in not focused where it needs to be,” he said.

Canyon Lake broker Nancy L. Melenyzer, who accompanied a friend to the DPS office, admitted ruefully she had tried texting while driving.

“I swerved all over the place,” Melenyzer said. “It's worse than cell phones. I think it will be a great law.”
Posted by Sam at 6:12 AM