He paid them back allright 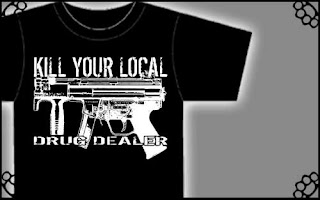 Getting rid of debt the easy non-bankruptcy way.

AUSTIN – A 19-year-old marijuana dealer told Austin police that he fatally shot a Houston couple in their condominium near the University of Texas last week to avoid paying the male victim thousands of dollars in drug money.

Police said Sunday that it appears Goosey had been dealing marijuana for at least three years, and that Thompson owed him a substantial amount of money for drugs he had been given to sell.

“Thompson felt like he was at the end of his ability and, sadly, he felt like this was the only avenue of escape he could utilize,” Lt. Mark Spangler, head of the violent crimes unit, said.

Thompson became a suspect after cell phone records showed he called Goosey a short time before the murders, Spangler said. An anonymous tip confirmed that police were on the correct trail.

A search warrant was executed on Thompson's residence Friday, and he was initially charged with marijuana possession.

During interviews with police, Thompson admitted that Goosey had “fronted” him substantial amounts of marijuana to sell and that he did not have the money to repay him, Spangler said. Goosey was “pressing” him to pay up.

Barnett, who lived with Goosey, appears to have become a victim solely by being home when Thompson arrived, police said. There is no evidence that Barnett was involved in Goosey's marijuana dealings or that she used marijuana, Spangler said.

Police refused to give any additional details, other than that the victims were shot. They're continuing to investigate the case, including looking for people who may have provided a gun and transportation to Thompson.

Thompson, whose parents live at Lake Travis, attended high school in the Austin area. He was not a UT student.

He and Goosey became acquainted three years ago through Goosey's marijuana business, police said. Goosey appears to have been a mid-level player in a distribution system,

The couple's bodies were discovered after Barnett did not show up at her parents' house as expected.

A joint funeral service will be held today in Houston. “We are relieved that a suspect in the murders of our children has been taken into custody,” said Gary Tidwell, attorney for the families.