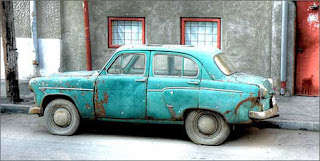 I liked the comment "If they can't administer a program like this, I'd be a little concerned about my health insurance,"

So true, just ask any vet who has to use a V.A. hospital.

Gee, what could go wrong?

NYC Car Dealers: How Could Obama Administration Mess This Up?

New York (CBS) "Cash for Clunkers" came to a screeching halt Thursday, after only six days on the road.

In a shocker, the government announced it would suspend the program at midnight because demand was too great.

It may have been the best $1 billion the government has spent so far this year.

Business was humming at Crestmont Toyota/Volkswagen Thursday night as salespeople rushed back to work on news that the government's "Cash for Clunkers" program was being suspended.

It's the deal where you get up to $4,500 for your older low mileage beast if you buy a new car with more efficient fuel consumption.

On Thursday night we learned the program was only good until midnight, all because of a backlog of red tape. So the salespeople were trying to get their deals through the government's Web site.

"People are loving it. It's wonderful. It's a great stimulus package," salesman Andy Beloff said.

But when asked if the government was running the program well, Beloff said, "No. No."

The dealership's lot had roughly 40 clunkers waiting to be shipped to the junkyard. Each one has already been replaced by a brand new lower mileage car. The program only started last Friday. It's a victim of its own success.

But the money may be running out faster than anyone imagined.

With almost 23,000 deals already processed and tens of thousands more in the pipeline, it's possible the $1 billion allocated for the program might have already run out and into the pockets of people like Christie Acosta, who knew a good deal when she saw one.

For the economy it's good news, but the government's miscalculation has some a little nervous.

"These are just the deals we have to submit tonight," Crestmont president Bill Strauss said while holding a stack of papers. He said the dealership has over $100,000 on the table.

"If they can't administer a program like this, I'd be a little concerned about my health insurance," car salesman Rob Bojaryn said.

The "Clunkers" program was being administered by the National Highway Safety Administration, which has seemed overwhelmed from the get-go. Some in Congress are expected to push for expansion of the $1 billion budget on Friday.

If you have a "Clunkers" deal in the works, don't worry. The government said Thursday any transactions already made between dealers and consumers will be honored.
Posted by Sam at 7:28 AM