Safety is the number one concern 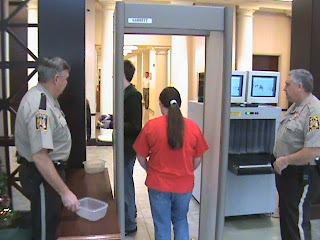 Having come to Comal County from Bexar County I have always been struck by the lack of security in the Courthouses here.

This is a concern for all who work here and to the public that come here for jury duty or whatever. I am grateful that the Commissioner's Court is addressing these concerns in the proposed new Justice Center.

The new center — a proposed three-story, $36 million, 90,000 square-foot facility — is planned to sit along Seguin Avenue between Zink and Bridge streets. It eventually would house the district attorney’s office, district court, the county court-at-law and the district clerk’s office.

“There are six courtrooms in our current courthouse complex...” Malloy said. “There are numerous public entrances to these complexes. It’s next to impossible to screen that many entrances ... In some of these entrances, there’s absolutely no screening before the public reaches officials or employees.”

This creates a major security risk, he said.

“The holding cells are within the district courts...” Flusion said. “We’re dealing with the Mexican Mafia, murderers and child molesters, as well as those who committed misdemeanors ... There are places where these prisoners have to be moved right past the public ... This is the worst-case scenario. This is really the worst way to do this.”

Things have to change, Malloy said. He laid out how the proposed justice center would increase security measures.

“The new justice center will have the six courtrooms all in the same building...” he said. “There will be only one public entrance and everybody headed in the entrance will be screened. We’ll have X-rays and metal detectors, and we’ll screen everyone.”

The building’s holding cells would be in a basement area. Elevators would take prisoners up from the cells to a staging area behind courtrooms where their trials would be held, Flusion explained.

“The prisoners never come in contact with the public,” he said.

“I hate to spend $40 million of your tax dollars on this just to protect us from the people that can’t follow our laws,” Scheel said. “But I see this as necessary ... I sometimes look out my window when they’re taking a prisoner into court and I see five guards ... around the van. I know if there’s a situation, bullets could fly.”

“The security situation is intolerable, and it’s high time we get it fixed,” Parker said.
Posted by Sam at 6:57 AM