Repent and be saved 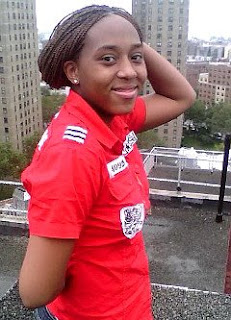 I am sure, unfortunately, we'll be hearing more about her in the future.

A heartless kitty killer hissed angrily at animal rights activists Wednesday, grinning widely as she took credit for stuffing the helpless pet into a 500-degree oven.

"It's dead, bitch!" snapped an unrepentant Cheyenne Cherry, sticking her tongue out after a plea bargain that will put her behind bars for a year in the May 6 killing of tiny Tiger Lily.

Cherry, 17, was confronted after her guilty plea in Bronx Supreme Court to charges of animal cruelty and attempted burglary in the May 6 killing at her former roommate's apartment.

Tiger Lily was left to die inside the blistering oven after Cherry and a 14-year-old friend trashed the apartment of Valerie Hernandez, destroying furniture before stealing DVDs and food.

After her arrest, Cherry told police the cat killing was "just a joke."

In court Wednesday, Cherry admitted to Judge Margaret Clancy that the younger girl put the cat in the oven - and "I didn't let the cat out."

The pair fled the apartment because they didn't want to hear the dying cat's cries or desperate scratching at the oven door, authorities said.

The second girl is facing trial in Family Court because of her age. Prosecutor Jennifer Troiano said Cherry was granted a plea deal because her cohort was "more culpable" for the crimes.

Under the agreement, Cherry pleaded guilty to two charges in a six-count indictment. She waived her right to appeal and agreed not to keep a pet for the next three years. Cherry, jailed on a probation violation, faces formal sentencing July 31.

As she exited the courtroom, she passed a row of animal rights activists outraged by her crime.

"Justice for Tiger Lily," read one sign held by the demonstrators.

Sharon Tuerlings, 43, of Levittown, L.I., extended both her middle fingers and kissed them. Cherry grinned widely, stuck out her tongue and responded with her profane retort.

Cherry is not new to animal crimes.

She was busted last year for using a BB gun to dog-nap a teacup Yorkie with her boyfriend. She was also arrested for robbing a man of his iPod at gunpoint.

The dozen animal lovers who attended the hearing said they represented more than 20,000 people who signed an online petition supporting harsh punishment for Cherry.

They were thrilled by the deal that guaranteed Cherry would do time for the cruel killing. "She is dangerous," said Brooklyn cat owner Josie Marrero. "A very dangerous young lady."

Tuerlings said she wanted to get a glimpse of the monster behind the cat execution. "It felt so good to look at her ugly face," she said. "Those evil eyes that she has."