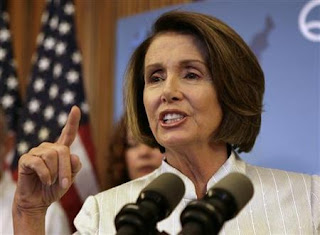 The best weapon the Republicans have for 2010?

Well, of course, Reid, Dodd, Waxman, and Franks too.

Can't leave them out.

This all smells of desperation, doesn't it?

Pelosi lashes out against insurance companies

WASHINGTON (Reuters) - U.S. House of Representatives Speaker Nancy Pelosi on Thursday ramped up her criticism of insurance companies, accusing them of unethical behavior and working to kill a plan to create a new government-run health plan.

"It's almost immoral what they are doing," Pelosi said to reporters, referring to insurance companies. "Of course they've been immoral all along in how they have treated the people that they insure," she said, adding, "They are the villains. They have been part of the problem in a major way. They are doing everything in their power to stop a public option from happening."