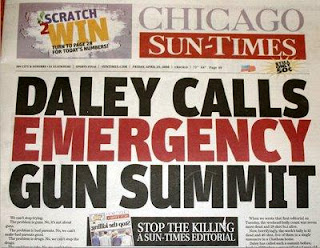 Wow, its like Chicago in the 'Roaring 20's' all over again.


More Than A Dozen Shot In Chicago Overnight
7 Victims In One Attack; Total Of 15 Hurt Over Four Hours

Chicago (CBS) - At least 15 people were shot and wounded in Chicago overnight, seven of them in a single incident on the city's West Side.

In that incident, police were called to the scene of a shooting at Walnut Street and Homan Boulevard at 10:43 p.m.

Seven people were shot, according to Fire Media Affairs Dir. Larry Langford, who said six people were initially hospitalized in critical condition and one person, an adult man, was taken in stable condition after suffering a graze wound.

One person was found shot inside a grocery store and the six others were found within a half-block radius of the store, Langford said.

All victims were male, Langford said. They ranged in age from 15 to 28, and were taken to Northwestern Memorial Hospital, St. Anthony Hospital and Stroger Hospital of Cook County for treatment of their wounds.

The shooter or shooters are unknown early Wednesday and no one is in custody, police said.

About an hour earlier, three people -- including a woman standing with her baby in a stroller -- were shot within 20 minutes in separate incidents on the South and West sides.

In the South Shore neighborhood about 9:30 p.m., a 22-year-old man was shot in the hand and suffered a minor head wound at 7700 S. Avalon Ave., Langford said.

The shooting was preceded by a carjacking more than two hours earlier in the 8800 block of South Parnell Avenue, when five suspects approached the victim and physically removed him from his vehicle at gunpoint, according to police News Affairs.

The suspects then put him in their vehicle and took him to his residence, where they stole his TVs. After the robbery, they drove the victim to the Avalon Avenue address where they beat him and then shot him as he ran away, News Affairs said.

The man was taken to Stroger Hospital of Cook County in stable condition, Langford said.

At 9:31 p.m. near the intersection of King Drive and 64th Street in the Woodlawn neighborhood, a 25-year-old woman was shot.

She was standing outside with her baby in a stroller talking to friends on the grounds of a gated housing development when three males wearing black hoodies burst out of a nearby Auto Zone store and opened fire, according to a Grand Crossing District police captain.

The woman -- who was not the target of the shooting -- then felt a sharp pain in her lower right leg and discovered she was shot, according to the captain, who said the baby was fine and no one else was shot.

The woman was taken to University of Chicago Hospitals in good condition, according to the captain and Langford.

In a third shooting, a 22-year-old man walked into Loretto Hospital with a gunshot wound to the ankle after being shot at 165 N. Laporte Ave. in the West Side's Austin neighborhood about 9:50 p.m, Langford said. Police News Affairs Officer Ron Gaines said the shooting possibly happened during a robbery and that the victim was in good condition at the hospital.

But even after all that, the violence wasn't over.

At 11:02 p.m., two men were shot as they sat on a porch at 3037 S. Springfield Ave. in the Little Village neighborhood. They were shot by members of a rival gang who came by on foot, police said.

One victim was shot in the chest and the other was shot in the eye and both went to Mount Sinai Hospital in stable condition, according to Gaines, who said the injuries did not appear to be life-threatening.

Not long afterward, a man was hit by gunfire in the 4200 block of South Wells Street, when two other males began shooting about 11:20 p.m., according to a report from police News Affairs. The victim was hit in the leg and taken in stable condition at Provident Hospital of Cook County, the report said.

Farther south, a teenage boy was shot and wounded late Tuesday while walking in the 10700 block of South Champlain Avenue about 11:50 p.m. The shooting was a drive-by, and police are looking for a white GMC.

he teen was hit in his right side and is in good condition at Advocate Christ Medical Center in Oak Lawn, police News Affairs said. Detectives said the victim was treated and released from Christ.

In another incident, a man was shot and critically wounded at 7211 S. Cornell Ave. in the South Shore neighborhood. He was shot and wounded in the chest and upper shoulder at 1:19 a.m., police said.

The man had been sitting inside his car -- where investigators found blood -- but he was found shot on the street about four doors down, according to police. He was taken to Northwestern Memorial Hospital in critical condition.
Posted by Sam at 6:42 AM