Fight to the south 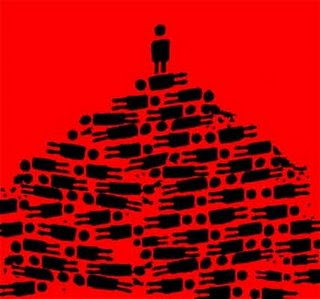 In my opinion this will be one battle the Mexican government and BTW the U.S. government cannot afford to lose.

The consequences would be more drugs and more corruption in our neighbor to the south. Don't even think it wouldn't spill over to our side of the border.

May God grant serenity and peace to the murdered officers and their families.

MEXICO CITY — Twelve people whose tortured and mutilated bodies were found piled in a heap beside a rural road were federal intelligence officers, an official confirmed Tuesday.

The bodies of 11 men and a woman were discovered late Monday afternoon in violent Michoacán state, where gangsters launched an offensive against federal forces over the weekend following the capture of one of their leaders.

In all, at least 18 federal officers and soldiers have been killed in the attacks, which are being blamed on La Familia Michoacána, one of Mexico's most violent criminal organizations.

“La Familia Michoacána has been characterized by its hostility,” said Monte Rubido, the government's national security spokesman. “We shouldn't be surprised by this kind of reaction.”

The killings of the 12 intelligence agents — who are presumed to have been captured during the weekend attacks — mark the hardest single blow against federal forces in President Felipe Calderón's 31-month-old crackdown on Mexico's narcotics smuggling cartels.

Photographs and videos of the dirt-caked bodies posted on Mexican Web sites suggested they'd been previously buried before being dumped on the roadside.

Four other bodies, presumably belonging to gangland rivals of La Familia, had been left in the same spot last week.

“We're waiting for you,” read a taunting sign left with the bodies.

Several hours later, gunmen ambushed a convoy of federal police on a nearby highway, killing two officers and wounding several others.

The weekend attacks erupted almost immediately after the predawn capture Saturday of Arnaldo “La Minsa” Rueda, who officials describe as a top operative of La Familia, responsible for trafficking the groups' marijuana, methamphetamine and cocaine to U.S. and Mexican consumers.

La Familia burst on to Mexico's national stage in October 2006 when its assassins tossed five decapitated heads on the dance floor of a discotheque in a small Michoacán town.

The violence prompted Calderón to launch his war on organized crime, which began in Michoacán, the president's native state.

Once allied with the Zetas, narcotics smugglers and kidnappers based in the cities bordering far South Texas, La Familia has been battling that gang and others from the Pacific Coast state of Sinaloa for control of crime in Michoacán, bordering states and Mexico City. Hundreds have been killed in the fighting.

Federal police in May arrested 10 Michoacán mayors and aides to Gov. Leonel Godoy on charges of working for La Familia.

On Monday, Rubido accused a half-brother of Godoy and another politician of working for the gang.

In all, gangland violence has killed more than 11,000 Mexicans since Calderón ordered federal forces into the fight upon taking office in December 2006.

But more than 500 police — many of them working for state and local forces that federal officials say have been corrupted by mobster graft — have been assassinated in the past three years.

The casualties include more than 70 soldiers and dozens of federal police killed in shootouts with the gangsters.

“It's become clearer that the Mexican government is constantly, efficiently and permanently advancing,” Rubido said Monday to questions from reporters. “We can't under any circumstances assume that they are losing ground.”