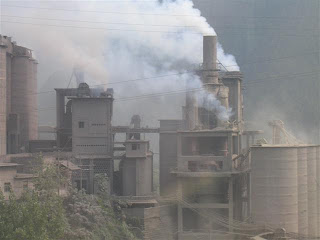 You want to shut down the plants and ask us to drive less and/or take buses. Yet the buses run on inconvenient schedules and don't go to many places folks need to get to. Light rail has been scuttled time and time again. What alternatives do you offer except platitudes?

Instead of shutting down can the plants create less nitrous oxides by operating at night? Are there scrubbers or other ways of capturing the emissions?

BTW that is a picture of a Yangtze, China cement plant NOT a plant in the San Antonio area which don't spew like this one does.

Burning at a minimum of 2,400 degrees Fahrenheit, the fire inside the kiln at Capitol Cement is hot enough to melt steel.

Flashing orange and white as they soar through a rotating tunnel the size of two semi-trucks, the flames change the chemical structure of the crushed limestone inside and vaporize almost everything else.

Fueled by a mix of coal, petroleum coke and sometimes tires, the operation never stops unless something goes wrong.

“If that’s running, then we have a chance at making money,” plant manager Gerry McKervey said as he looked out at the roaring machinery amid a 600-acre quarry east of San Antonio International Airport.

But on Monday, Peter Bella, director of natural resources for the Alamo Area Council of Governments, is going to ask Capitol and five other area cement plants to consider temporarily shutting down or at least slowing operations this summer to reduce their emissions of nitrogen oxides — and possibly keep the federal government from designating San Antonio as a dirty-air city.

They’re some of largest polluters in the region, but the massive heat needed to turn limestone into cement makes shutting down their kilns difficult, expensive and inefficient. It’s a big thing to ask an industry that already has made significant cuts.

Right now, the region is one part per billion (ppb) short of the federal limit.

The EPA counts the fourth-highest ozone concentration in an eight-hour period each year, then averages it with the previous two years. If that average is above 75 ppb, it will declare the area to be in nonattainment of federal clean air standards.

Then the feds bring in more regulation, which won’t go away until air quality improves. Industries that want to expand or move to the area will have to deal with additional rules; highway dollars will come with more requirements.

“If that happens, our goose is cooked,” Bella said. “Nobody wants to see nonattainment.”

Especially the cement plants — their bottom line is tied directly to the continued growth of the region, said Max Frailey, the vice president of cement at Capitol.

“We are in the construction business,” he said. “Everyone wants concrete.”

Only one monitoring station has to have an average over 75 ppb for the EPA to bring down the hammer. Right now, the three-year average of the monitor at Marshall High School is sitting at 74 ppb. The one at Camp Bullis is at 73.

And the worst of the ozone season is about to begin. “We are hanging on by the skin of our teeth.” Bella said.

Ozone is a lung irritant and triggers asthma attacks. When concentrations are high, the public is advised to limit outdoor activity and be mindful of children and those with respiratory illnesses.

But even if the cement plants agree to slow down — and it is unlikely that they will — there’s no guarantee ozone levels will stay low. On June 5, the day the monitor at Marshall High School peaked at 90 ppb, Capitol Cement happened to be shut down for repairs.

AACOG estimates cement plants produce about 13 percent of the 192 tons of nitrogen oxides pumped into the air on a typical weekday.

The plants know and have undertaken efforts to reduce emissions. Capitol is a leader. Since 2004, it has reduced emissions by 60 percent, Frailey said.

By far, the biggest single source of the region’s emissions — 35 percent — is vehicle traffic, according to AACOG. If people drove less or took buses, it could have a greater impact than anything the cement plants could do.

But it’s far easier to get six cement plant operators at a table to talk about reducing their pollution than it is to convince 1.5 million drivers to change their habits, Bella said.

“The whole point in my mind is, are we as a community and as a people capable of not fouling our own nest?” Bella said. “Don’t we want to be in a situation that we make these reductions?”

Back at Capitol, one of the feeders to the kiln became clogged and the kiln’s rotation slowed. The fire was cut. Men scurried up the tower to find and free the blockage. Minutes ticked by. The kiln started to cool.

Fewer emissions were going up the stack, but less cement was being made, and it would take more fuel to reheat the kiln.

“It just depresses me,” plant manager McKervey said as he watched the kiln lose its efficiency. “And I was in a good mood.”