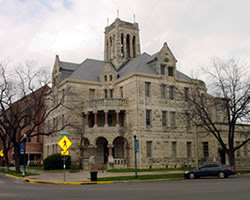 It has been a challenge juggling courtroom space and court schedules and dockets.

I have been concerned as well, by the lack of security at the Courthouse here in general and am glad to see this project moving forward.

Commissioners to consider justice center
By Scott Sticker - The Herald-Zeitung

The new center — a proposed three-story, $36 million, 90,000 square-foot facility — is planned to sit along Seguin Avenue between Zink and Bridge streets. It eventually would house the district attorney’s office, district court, the county court -at-law and the district clerk’s office.

During the next four weeks, court officials will address the Commissioners Court each Thursday morning. Afterward commissioners will vote whether to approve the new center.

“We’re getting ready to have to go to the city with everything,” County Judge Danny Scheel said. “We’re working to make everybody aware of what we’re doing and why we have to do it. It’s an informational session on why we need this new center.”

“There really is a need for a new justice center,” Tharp said. “There are 20 entrances to the current downtown courthouse ... The employers, the public, the judge, the jury and anyone who enters that building could potentially be at risk ... There’s really no way to make sure that people coming in don’t have firearms or explosives.”

“There are eight judges with only four courtrooms...” Tharp said. “We’ve been making use to the best of our abilities the courthouse downtown, but we’re really at a crossroads now.”

Commissioners in January approved schematic drawings for the exterior of the building. They agreed the design of the building — with its columned entrance and large rotunda — is in keeping with the current look and feel of downtown New Braunfels.
Posted by Sam at 6:17 AM