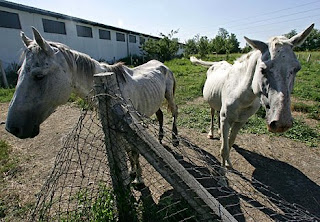 How can folks starve their horses?

But then we also had young women roasting a kitten in an oven. (not in Comal County)

All of this is inexplicable to me.

Lawmen arrested a New Braunfels couple Wednesday for allegedly not feeding at least two horses, starving one to death.

Gary Thomas La Rue, 43, and Tonnie Thompson La Rue, 40, were arrested and charged with two counts of cruelty to animals.

“They weren’t feeding them properly and one of them actually died,” Morris said. “Judging by the fact that one died, I’d say they must not have fed them for a while.”

The La Rues were booked into Comal County Jail Wednesday about 5 p.m., and each posted their $6,000 bonds about four hours later.

Repeated calls to the La Rues’ house were not answered and no answering machine picked up.
Posted by Sam at 6:26 AM