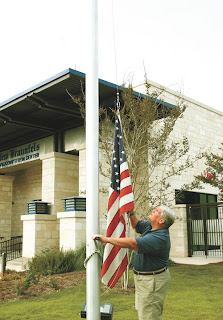 God rest both your souls and may God grant peace and serenity to your families.

Gentlemen, a grateful community, State and nation, as well as I, thank you for your service and grieve that you have paid the ultimate price for liberty and freedom.

Red, white and blue tribute
By Scott Sticker - The Herald-Zeitung

New Braunfels residents will wave their stars and stripes today to honor U.S. soldiers and their families.

City officials called for residents and businesses to show their patriotism by displaying American flags today.

In the past weeks, two New Braunfels men lost their lives serving their country.

Lance Corporal Brandon Lara died Sunday while serving his second tour in Iraq. The 20-year-old man was serving in the Marine Corps.

“Two families in New Braunfels have recently lost family members as a result of their military service and our hearts go out to them,” Boyer said. “...(Today’s) public display of patriotism will provide an opportunity for our citizens to express their condolences to those families as well as to honor the service of all former and present military members.”

Showing appreciation is important to the troops — both past and current — Vietnam Veteran Fletcher Andrews said.

“It shows support and that people believe in their troops,” Andrews said from the Veterans of Foreign Wars Post 7110. “We may not all believe in the war, but at least this shows people support their troops. I am a veteran of the Vietnam War ... When I returned, I didn’t get a ‘thank you.’ We didn’t get a homecoming. These guys though, I will fight to have them hear the words ‘thank you’ every day.”