Lower than the low 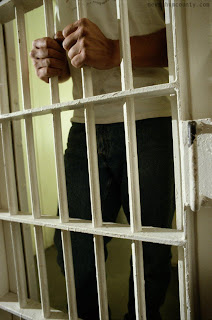 Six years in the pokey.

Registration as a sex offender for life.

I wouldn't want to be in his shoes in prison.

A San Antonio man was sentenced to six years in prison Tuesday after pleading guilty to molesting two girls, now ages 11 and 19.

State District Judge Pat Priest also ordered Carlos Puente, 30, to pay a $1,200 fine and to register as a sex offender for 10 years after his sentence is completed.

The sentencing on the indecency with a child by exposure charge came two months after the defendant's cousin, former Puente & Sons Funeral Chapels co-owner Frank Puente, was ordered to spend five years in prison following a federal child pornography bust.

Carlos Puente also worked at the funeral home, which until recently contracted with the county for pauper burials, authorities said.

Carlos Puente was convicted of exposing himself to the two girls on separate occasions and forced them to touch him inappropriately four years ago.

“Having this happen to my daughter made me feel like a complete failure as a mother,” the 11-year-old's mother said during a victim impact statement, expressing relief that Carlos Puente will no longer be on the streets.

During the brief punishment hearing, defense attorney Virginia Maurer said her client entered a no contest plea because he needed to help earn money for his family and was hoping to receive probation. He had no prior criminal history, she said.

As part of a plea agreement, prosecutor agreed to ask the judge for no more than six years in prison. But probation would be inappropriate in this case, said Assistant District Attorney Scott Simpson.

“A sex offender who won't admit he's a sex offender cannot be helped,” he said before announcing the prison time.