Remember you're under oath 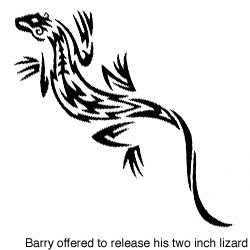 A whole new meaning to the phrase trouser lizard.


A man who appeared in court accused of flashing his penis at a female train guard has walked free, thanks to a tattoo on his manhood.

Hartlepool magistrates court had been told how 28-year-old Barry Kenny had drunkenly displayed his willy during a train journey from Newcastle to Hartlepool.

But the woman had not mentioned any "distinguising marks" on the penis and Barry has a two inch long lizard tattoo running along his penis.

As a result his solicitor was able to get the charges dropped, but only after Barry offered to show his willy to magistrates.

Before being reminded he was under oath Barry had wanted to claim the tattoo was seven inches long.
Posted by Sam at 6:41 AM