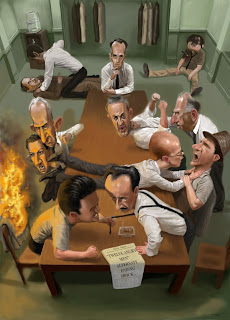 No unanimous verdict required in Oregon or Louisiana?

Apparently all it takes in Oregon and Louisiana is a 10-2 verdict to determine guilt beyond a reasonable doubt. How can that be? As the article below points out 10 out of 12 means about 17% doubt in a case.

If 17% of the jurors believe someone is not guilty, after hearing all of the evidence, how can one presume that the "trier of fact" found guilt beyond a reasonable doubt?

I mean why not? If you are going to do away with the requirement that a jury, in a criminal case, need reach a unanimous verdict, go for it, take it all away.

Heck make it 1 vs 11 while you are stomping on everyone's constitutional rights. rename the movie "One Angry Man". It'd be a shorter movie, too!

Sidebar - Guilty by a 10-2 vote: Efficient or Unconstitutional?

“Twelve Angry Men” might have been a much shorter movie had it been set in Oregon. Instead of letting Juror No. 8, the lone holdout played by Henry Fonda, methodically convince his fellow jurors that there was good reason to doubt the defendant’s guilt, an Oregon jury might have just voted and been done with it.

That’s because Oregon is one of only two states that does not require juries to reach unanimous verdicts in criminal cases. Like Louisiana, it allows convictions by a vote of 10 to 2.

In a pair of decisions in 1972, the Supreme Court said that was all right, that the Constitution does not require states to insist on unanimity.

But the decisions, one each from Oregon and Louisiana, were badly fractured and internally inconsistent. They concededly ignored the historical record and made assumptions about jury behavior that have been called into question by more recent research.

Scott D. Bowen, an Oregon man sentenced to 17 years in prison for sex offenses, is now asking the Supreme Court to have another look at the issue. The case against Mr. Bowen was based on statements from his 15-year-old daughter, who had run away from home. Mr. Bowen said his daughter had made up the accusations to gain her independence.

Prosecutors were able to convince only 10 jurors of Mr. Bowen’s guilt. In Oregon, that was enough.

Mr. Bowen may find allies in two of the current court’s more conservative members, Justices Antonin Scalia and Clarence Thomas, who have often joined with more liberal justices to enforce the original meaning of constitutional provisions protecting the rights of criminal defendants.

The men who drafted the Sixth Amendment understood criminal convictions to require, as William Blackstone put it in 1769, “the unanimous suffrage of 12” of the defendant’s “equals and neighbors.” The Supreme Court has invoked that language in recent decisions concerning the importance of the jury’s role in determining facts supporting convictions.

In its brief urging the Supreme Court not to hear Mr. Bowen’s case, Oregon acknowledged that “the common law at the time of the founding required a jury verdict to be unanimous.”

“But it does not follow from that historical fact that a unanimous jury became a constitutional guarantee,” Oregon’s brief said. “Wiser or not, unanimous juries are not a Sixth Amendment mandate.”

“Pretty much the only difference is that we have fewer hung juries,” he said.

Mr. Marquis added that 10 votes were required for conviction or acquittal and so the requirement favored neither the prosecution nor the defense. “Those two people who hold out,” he said, “are as often holdouts for the prosecution.”

But defense lawyers say the rule was devised to make obtaining convictions easier. Indeed, pamphlets distributed to Oregon voters before they authorized the 1934 amendment to the state’s Constitution allowing nonunanimous juries just about said as much.

According to the Oregon Criminal Defense Lawyers Association, most felony convictions in the state are the products of nonunanimous juries. Oddly, misdemeanor convictions still require a unanimous vote, though from a six-member jury. That means, the association said in a brief supporting Mr. Bowen, that prosecutors face a lighter burden in more serious cases.

Oregon does require a unanimous vote in first-degree murder cases, and Louisiana requires it in capital cases.

A unanimity rule would seem to reinforce the requirement that prosecutors prove their cases beyond a reasonable doubt. Two jurors out of 12, if you do the math, represent about 17 percent of the panel. That’s a fair amount of doubt.

But Shari Seidman Diamond, an authority on jury behavior at the Northwestern University law school, said those concerns were overblown. It is hard for a single person to hold out, Professor Diamond said, but very important that jurors deliberate until unanimity is reached.

“The argument that people who are in the minority are somehow deviant, not worth respecting or making crazy arguments,” she said, “just doesn’t hold up.”

A supporting brief filed by Professor Diamond and 16 other scholars said “there was little systematic evidence one way or the other” about jury behavior when the Supreme Court last addressed the question. “Empirical studies conducted since 1972,” the brief went on, “show that jury deliberations are in fact less vigorous when unanimity is not required.”

Justice Potter Stewart, dissenting in the 1972 decision from Louisiana, identified a further problem with nonunanimous juries. The jurors in the majority, he said, “can simply ignore the views of their fellow panel members of a different race or class.”

Indeed, that may have been part of the reason for the practice in the first place.

“Recent historical scholarship indicates,” Charles J. Ogletree, a law professor at Harvard, wrote in a supporting brief in Mr. Bowen’s case, “that one of the original purposes of the nonunanimous jury was to functionally silence the views of racial and ethnic minorities and women.”

The defendant in “12 Angry Men” may have been guilty. What the jury system aims to do, Juror No. 8 explained, is calibrate doubt.

“We’re just gambling on probabilities,” he said. “We may be wrong. We may be trying to return a guilty man to the community. No one can really know.”

The question is where to set the bar. Should the court agree to hear Mr. Bowen’s case, it will decide whether proving a case to the satisfaction of roughly 83 percent of the jurors is good enough.