You're kidding us, right? 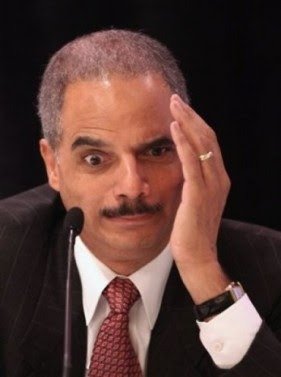 Jeeze, the man can't even  lie competently can he?

(CNSNews.com) – Attorney General Eric Holder claimed during congressional testimony today that internal Justice Department emails that use the phrase “Fast and Furious” do not refer to the controversial gun-walking operation Fast and Furious.

Under questioning from Rep. Jason Chaffetz (R-Utah), who read excerpts of the emails at a House Judiciary Committee hearing on Justice Department oversight, Holder claimed that the phrase “Fast and Furious” did not refer to Fast and Furious but instead referred to another gun-walking operation known as “Wide Receiver.”

However, the emails refer to both programs -- "Fast and Furious" and the "Tucson case," from where Wide Receiver was launched -- and reveal Justice Department officials discussing how to handle media scrutiny when both operations become public.