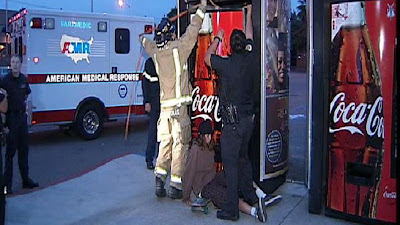 Next time just pay for the damn Coke.

Teen tries to steal soda, gets stuck in vending machine
A 17-year-old trying to swipe a soda from a vending machine became stuck in the receiving slot, prompting an elaborate, hour-long rescue by authorities
By Monica Garske - NBC San Diego

A 17-year-old boy got in way over his head when he tried to steal a soda from a vending machine and became stuck in the machine’s receiving slot.

Police said the incident happened around 5 a.m. Saturday morning at the trolley station on the west end of 22nd Street in National City.

The teen – who police said is a student at Sweetwater High School -- stuck his arm into the receiving slot of a vending machine in an attempt to steal a soda and got wedged inside the slot, according to authorities.