Must pay to play 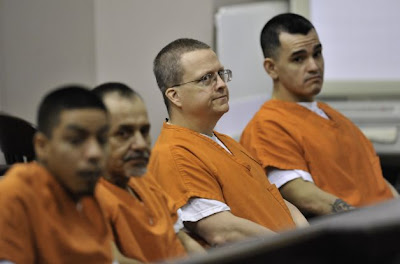 Sorry, perhaps you shouldn't have spent all your money on your defense attorney at trial.

It also probably didn't help that you have an appellate attorney from one of the more expensive criminal defense firms in San Antonio as well.

No relief for killer claiming poverty
By Craig Kapitan - Express-News

When Alamo Heights resident Jon Thomas Ford went to trial for murder last February, he had by his side Dick DeGuerin, one of the most prominent — and, presumably, most expensive — criminal defense lawyers in Texas.

But now Ford is broke, his new appellate attorneys said Thursday as he returned to court to ask the judge to waive a $15,000 bill for a transcript of the monthlong trial that ended with his conviction.

State District Judge Maria Teresa Herr denied the request after about two hours of testimony in which prosecutors suggested Ford's father was hiding assets to make the defendant look less wealthy — perhaps in an effort to shield him from a potential wrongful-death lawsuit. The father vehemently denied the accusation.