Do you want non-voters to vote? I don't. 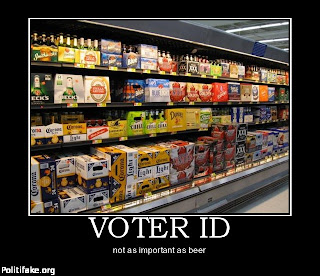 I really don't understand the fight over showing a photo ID when you go vote.  You have to show one for practically everything else.

It only makes sense if you want to condone illegal voting or vote fraud in my opinion.  Especially when the State has said it will not charge a cost to get the ID's.

Try buying beer without a photo ID to show you're over 21.

WASHINGTON — Texas is preparing for a legal showdown next month in federal court over a new voter photo ID law passed by the Legislature.

The law was blocked by the Justice Department over claims that it discriminates against minority voters.

“We objected to a photo ID requirement in Texas because it would have had a disproportionate impact on Hispanic voters,” U.S. Attorney General Eric Holder explained to a conference of black clergy in a speech about the continued need of protections under the Voting Rights Act.