Are we in bath salts Hell? 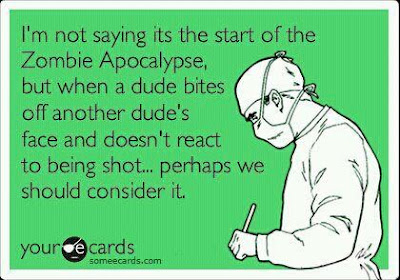 What is up with all the eating, biting etc. this Summer?

Is it the Zombie Apocalypse or what?

MIAMI (CBS Tampa) – If imitation is the highest form of flattery, then Rudy Eugene, the Miami cannibal who chewed off a homeless man’s face while reportedly high on bath salts, has an admirer in his own neighborhood.

Brandon De Leon, 21, was arrested Saturday after getting into a fight at a local Boston Market and resisting arrest, but his threats of wanting to eat a Miami police officer followed by his attempt to bite the officer have raised more concern following the recent act of cannibalism in the Miami area that has made international headlines.

CBS News reports that North Miami Beach Police spotted De Leon arguing with Brian Yerdon, 33, outside a Boston Market on Saturday. The verbal fight reportedly blocked the entrance so no customers could enter or exit, according to police. WTVJ-TV reports that when police tried to break up the fight, De Leon gave them the middle finger, saying, “F— you,” in the process, according to police. De Leon and Yerdon were arrested at the scene, though De Leon was reportedly physically resisting arrest.