Typical mayhem on the streets of San Antonio 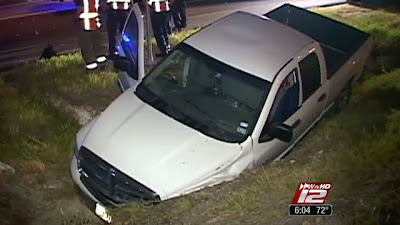 Perhaps they were despondent over the Spurs elimination by the Oklahoma City Thunder from the NBA playoffs?


2 cars wreck in separate DWI cases
By Robert Kolarik - Express-News
Alcohol was suspected in a pair of overnight wrecks, KSAT-TV reported on its 5 a.m. newscast.

In the first crash, a car going too fast on the Loop 410 access road knocked down a pole when it attempted to turn onto Wurzbach Road, the station said.

The motorist was hospitalized with minor injuries and is expected to face charges of driving while intoxicated, KSAT reported.

The rest of the story:  (Links to original article)
Posted by Sam at 7:56 AM