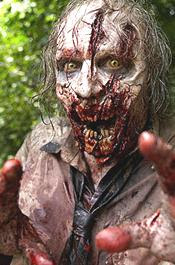 Perhaps I should have a separate blog for Zombie news?

From the Zombie Apocalypse news desk comes word of the arrest of a Louisiana man who bit off a chunk of the face of a victim whom he allegedly battered during a bloody attack Saturday.

According to cops, Carl Jacquneaux, 42, attacked Todd Credeur outside the victim’s home in Scott, a city in Lafayette Parish. After punching Credeur in the face, Jacquneaux bit the 48-year-old victim in the face, “removing a large amount of flesh,” police reported.

An arrest warrant affidavit charges that Jacquneaux “began biting Mr. Credeur in the face, removing flesh the size of a quarter below the victim’s left eye.” A second affidavit accused Jacquneaux of “biting off half his cheek” and referenced “information” that Jacquneaux “had been up for several days on Meth.”