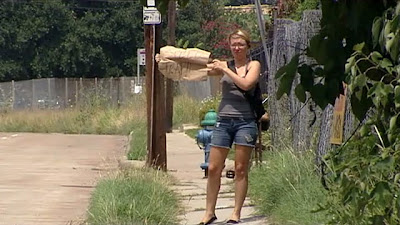 Boy that will get the po-po pissed in no time flat!

A Houston woman's attempt to save drivers from a speeding ticket landed her something worse: 12 hours in jail.

As she rode her bicycle home from a grocery store last week near downtown Houston, Natalie Plummer noticed police officers pulling over speeders. After she parked her bike and turned one of her grocery bags into a makeshift sign warning drivers about the "speed trap" ahead, an officer drove
up and arrested her.

"I was completely abiding by the law," Plummer told ABC's affiliate KRTK. "I was simply warning citizens of a situation ahead."