Why we need security at the Courthouse II 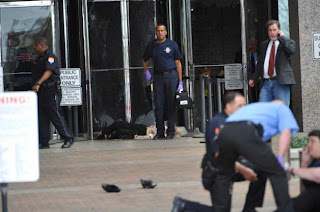 I first got wind of this yesterday when a friend in California started e-mailing me to see if I was alright.

I explained it was nearly 250+ miles away.

Unfortunately Minnie Ray Sebolt wasn't and was killed, may she rest in peace.

However the incident supports my theory that it isn't needed so much for criminal cases, even though there were criminal allegations, as it is for family law matters.

BEAUMONT — A long-standing family feud involving allegations of sexual assault of a child erupted in a “classic shootout” outside the Jefferson County Courthouse Wednesday, killing one innocent bystander and wounding three others, including the accused gunman's 20-year-old daughter.

Authorities said Bartholomew Granger, 41, of Houston, began shooting at relatives outside the courthouse shortly after 11 a.m. while waiting for his trial on charges he had assaulted a family member to resume. An elderly woman died in the entrance to the courthouse; one person was hit in the hand; a third, wounded in the back, managed to stagger into the building; and a fourth victim, his daughter, was felled in a parking lot.

Police said Granger, under fire from several police officers, then tried to escape in a pickup, which was disabled by gunfire before he could get very far. Wounded, he ran into an office building a couple of blocks from the courthouse, taking several hostages before being taken into custody about noon.