Where the First Amendment meets the road 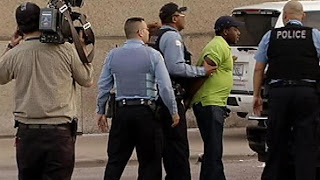 Hey! but its all okay because the Mayor of Chicago is Rahm Emmanuel.


Chicago police took two members of the media into custody Saturday, including an NBC Chicago photographer.

Photographer Donte Williams and WGN Reporter Dan Ponce were detained as they attempted to cover the story of a 6-year-old girl who was shot and killed. Crews were standing on a sidewalk outside Mt. Sinai Hospital, where the girl had been taken.

The hospital apparently called police, complaining of trespassers. The news crews, at the request of police officers, said they had already moved from a public sidewalk directly in front of the hospital, to a median halfway across the street.