Why we have security at the Courthouse 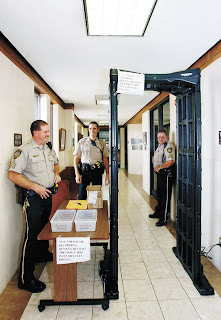 These are some pretty graphic photos, folks.

Pictured: The dramatic moment crazed gunman is taken down by armed cops after courthouse shootout that left a deputy and a bystander wounded

A sheriff's deputy, suspected gunman and a bystander were wounded Wednesday afternoon during an exchange of gunfire outside a Tulsa courthouse, sending people scattering from a crowded plaza as an employee at a nearby library used his camera to chronicle the events.
Police spokesman Leland Ashley said authorities responded to a report of a person firing into the air between the Tulsa County Courthouse and the library. Deputies, including the one who was wounded, exchanged gunfire with the shooter, Ashley said.

'During the course of exchange of gunfire, an innocent bystander was hit,' Ashley said. Disturbance: The man arrived in front of the courthouse with a gun and fired it into the air

Unstable: It's unknown who the man is and what caused him to engage the police in a gun battle

Unbelievable pictures: John Fancher, a Tulsa City-County Library employee witnessed the first shots and grabbed his camera
He said the injuries to the deputy and the bystander did not appear life-threatening.

No names were immediately released.

Emergency Medical Services Authority Capt Chris Stevens said one man was taken to a hospital in critical condition and that two other people were hospitalized, one in serious and one in fair condition, and that a woman, who was not hit by gunfire, was 'shaken up' and treated at the scene.

John Fancher, a communications coordinator with the library, told The Associated Press that he heard gunshots, then grabbed his camera and stood at his office window to take pictures.

Wounded: The man sat down and then suddenly stood and waved his gun at deputies, witnesses say Approach: The deputies who were not wounded in the shootout approach the wounded man and wait for backup Wounded: The man lies bleeding, barefoot, on the ground as more officers arrive at the scene Backup: More officers pour out of the county courthouse after the gunfire, which wounded an officer and a bystander
'I see a guy barefoot nonchalantly just waving a gun in the air,' Fancher said.

'I'm thinking this is not the downtown I remember working in. I start snapping off some shots and he sits down, just casually sits down, gun in his hand and three sheriff's come out of the courthouse and I can't hear what they're saying.'

Fancher said the man turned around and stood up with his gun.

'That's when (the deputies) did what they had to do,' he said. Candid shots: Francher continues to snap away as more offers arrive at the scene and police begun handcuff the suspect Critically wounded: When the officers roll the gunman over, his shirt and the ground are soaked with blood pouring from his wounds Unknown: It's unclear who fired which shots and whether the bystander was struck by the gunman's bullets or shots from the police