This is what it comes down to 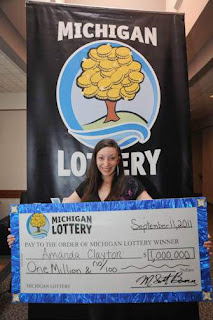 The Entitlement Society is big in the Detroit area and throughout Michigan.

BTW the radio this morning said the Michigan food stamps program has cut her off of the program.

Amanda, use some money, by yourself a clue, sell one of your two houses and invest wisely.  Get an education too and a job.

After receiving a $1 million check from the state lottery, a Michigan resident continued to use a state-issued food stamps card to buy her groceries, according to reports from Detroit Local 4 and the Daily Caller.

“I thought that they would cut me off, but since they didn’t, I thought maybe it was okay because I’m not working,” said the 24-year-old winner, Amanda Clayton, who receives $200 a month in state assistance. Her case has prompted lawmakers to propose a bill requiring the lottery to alert the state of winners so they can be taken off such programs.

From the Daily Caller:


When Local 4 asked if she felt she had a right to the money, Clayton responded, “I mean I kinda do.”
Clayton justified the sentiment by explaining that after taking her winnings in a lump sum and having to pay taxes, the total amount was just over half of the initial winnings.
“I feel that it’s okay because I mean, I have no income and I have bills to pay,” she said. “I have two houses.”