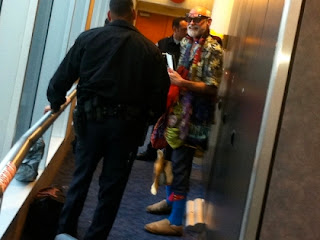 I'm pretty much thinking that you should be worried if a guy, dressed like this, shows up for your plane flight.

FORT WORTH (CBSDFW.COM) – A disturbance on-board an American Airlines flight scares passengers and lands a man in police custody.

Flight 2401 left Dallas/Fort Worth International Airport bound for Los Angeles. Passenger Lori Barber said about 15 minutes into the flight a man charged past her, demanding to see the pilot.

Barber told NewsRadio 1080 KRLD the man was hard to miss.

“Well he was wearing two pairs of glasses, one with a red beam coming out of the lens, and he had three or four ‘man purses’ on and he had Superman socks on,” she recalled.