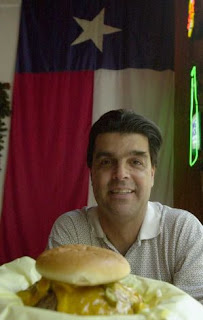 I was very sad to hear yesterday about the passing of Chris Madrid.

One of my earliest San Antonio memories was being taken to his restaurant during the Summer of 1988 when I was clerking at the law firm of Plunkett, Gibson and Allen.  A young associate, David Benjamin introduced me to the famous "Bean" burger (Tostada Burger).

Several years later I held fund raisers there while running twice for Judge.

Chris Madrid, longtime owner of the namesake restaurant known for its burgers, died early Sunday at his far North Side home, officials and family friends said.

Madrid, 61, was pronounced dead just before 6 a.m., according to the Bexar County medical examiner's office and friends. The cause of his death has not yet been determined, but no foul play is suspected.

Services are pending, and there are no plans to close the restaurant because “the family plans to continue the tradition,” said his wife, Carolyn Madrid, and close friends. It will be open today.