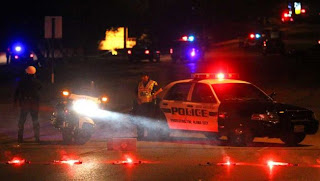 Determined to meet his maker.

Police shot and killed a suicidal man who fired at a group of officers early Thursday.

Police Chief William McManus said at the scene that police were notified that the man — believed to be in his early 50s — had called a crisis hotline about 2 a.m. because he was contemplating suicide.

Officers found the man about half an hour later near Fredericksburg and Hamilton Wolfe roads carrying a .38 caliber gun, McManus said.