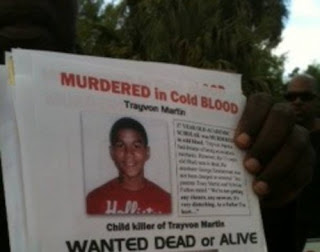 Have we come to this?

Are members of the New Black Panther party going to get away with posters calling for the alleged shooter of Trayvon Martin to be captured dead or alive?

Just a quick hypothetical, what if the KKK put out one calling for the capture dead or alive of an African-American for the alleged shooting and murder of a white teenager?

If we are a Nation of Laws, and we are, we cannot allow this kind of vigilantism of any color, stripe or persuasion to go unanswered.

We cannot, if we are to survive as a Nation of Laws.

Yesterday afternoon at a press conference, the New Black Panther Party for Self-Defense circulated a “wanted dead or alive” poster for George Zimmerman for shooting to death a Florida teenager four weeks ago.

Zimmerman, a self-proclaimed neighborhood watch captain said he accosted what he alleges was a suspicious looking black male walking through his neighborhood. He further contends the man punched him, and bloodied his nose, so Zimmerman fired a gun shot striking the man in the chest. The “man” was 17 year old Trayvon Martin, who would lie in the county morgue three days before police alerted his parents of their child’s death.

Minister Mikhail Muhummud led the press conference, calling for the firing of Sanford Police Chief Bill Lee, the arrest of George Zimmerman and some involvement from President Obama. Muhummud stated he is the southern regional director for the New Black Panther Party for Self-Defense located in Jacksonville, Florida. While Minister Muhummud fired off a list of demands and expressed outrage over the handling of the shooting and subsequent investigation; a member of the group passed flyers to about 100 people who showed up for the press conference. Muhummud told the group he was not concerned with rumors of death threats to George Zimmerman, “He should be afraid for his life…” (SEE http://youtu.be/ZE_i9TELcfw)