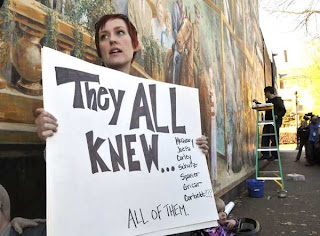 This would sort of tend to put the kibosh to the meme of "Who Knew" spouted by Penn State and officials.


At least as to the University Police, No?

It could've saved other kids from being sexually abused as well.

More than a decade before former Penn State coach Jerry Sandusky was charged with more than 50 counts of child sex abuse, a psychologist warned university police that his actions fit that of a “likely pedophile’s pattern.”

The finding by State College, Pa., psychologist Dr. Alycia A. Chambers, the therapist for one of Sandusky’s alleged victims, was contained in the internal Penn State files of a 1998 police investigation of the former coach for showering and bear hugging her client and another young boy in the school’s athletic locker room.

NBC News has obtained the complete file on the investigation – the police report and assessments by two psychologists who interviewed the boys -- which provides new details about Sandusky’s behavior. It also could raise fresh questions about how school and local authorities handled his case.