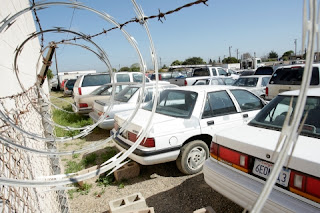 It worked for a little while apparently.

Don't these guys wonder that they will be caught?

A 27-year-old employee of United Road Towing who police said helped a man steal a motorcycle from the impound lot remained in the Bexar County Jail Wednesday on $10,000 bail.

A total of seven vehicles have been stolen from the lot on Growden Road and police said more arrests are possible.

Robert Tenorio was arrested Wednesday after a warrant was obtained on one charge of vehicle theft.