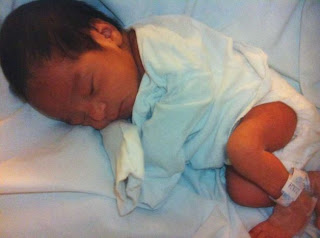 18 years for murdering his child?

Judge, what were you thinking?

A teen father accused of having slapped, starved, choked and given cocaine to his infant daughter before leaving her emaciated corpse outside a West Side firehouse was sentenced to 18 years in prison.

Ramiro De La Rosa, now 21, was to be in court Tuesday morning for jury selection in the case, in which he was charged with injury to a child. Instead, he agreed to plead guilty in exchange for prosecutors seeking a sentence of no more than 25 years in prison.

Visiting state District Judge Phil Chavarria then agreed with the defense to give a lesser sentence, citing the defendant's youth. The offense, a first-degree felony, could have been punishable by up to life in prison had a jury found him guilty.