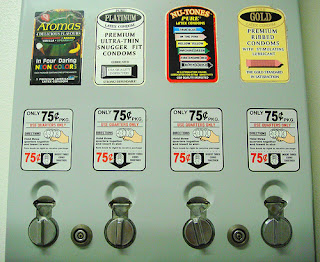 Complaining of the high costs of condoms.

There once was a lady named Fluke,
Whose beliefs are enough to make you puke,
To Congress she said
about her antics in bed
I want you to pay for my contraception too

Man shot at Detroit Gas Station, Reportedly over the price of Condoms
By Beth Fisher - WWJ

DETROIT (WWJ) - A man was shot and killed Friday night after an apparent dispute over the price of condoms at a Detroit gas station.

WWJ’s Beth Fisher spoke to an employee at the BP gas station on Fenkell and Meyers, where the shooting took place on the city’s westside overnight. The employee said the argument was apparently over the price of a box of condoms.

He said the customer bought a box of condoms, but made a comment that he was overcharged and could have bought them somewhere else for a cheaper price. After being told he couldn’t get a refund, the customer allegedly began tossing items off the shelves. That’s when, according to the employee, the overnight clerk came out with a gun and fired a warning shot, which struck the customer in the shoulder.