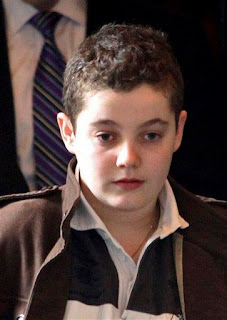 Okay when I first saw this article with the accompanying picture I thought, "no big deal".

But then I read that his son is 15, Fifteen!

Now that is a problem.

PARIS (AP) -- French President Nicolas Sarkozy says his youngest son was out of line when he and friends pelted a policewoman with "vegetables" but says there's always the risk that kids will be kids when left unattended.

In recent days, French media have reported that 15-year-old Louis Sarkozy and friends at the presidential palace threw tomatoes and wadded paper balls at the on-duty officer on March 8.

In an offbeat TV interview Friday, Sarkozy sought to set the record straight. He told Canal Plus: "He was wrong, but it wasn't little balls ... it was vegetables."