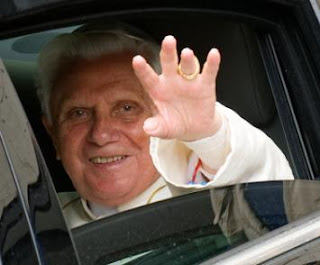 MEXICO CITY (AP) — Banners purportedly signed by one of Mexico's drug cartels and hung in Guanajuato promise there will be no violence during next weekend's visit to the state by Pope Benedict XVI, an official said Sunday.

At least 11 banners signed by The Knights Templar gang were found in five municipalities, including the city of Leon, where the pope begins his trip Friday, an official at the state Attorney General's Office said. The official agreed to discuss the events on condition of anonymity, because he was not authorized to disclose the information.

He said the banners were found Saturday hanging from pedestrian bridges and carried messages about "a sort of truce for peace and said they are going to keep the peace during the pope's visit."