Bye, have a nice trip! 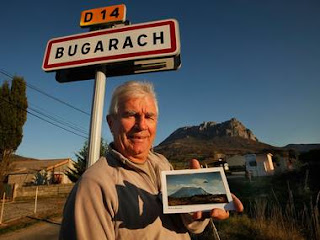 Write to us after you get there.

Hippies head for Noah's Ark: Queue here for rescue aboard alien spaceship
Thousands of New Agers descend on mountain they see as haven from December's apocalypse
By Oliver Pickup - The Independent

A mountain looming over a French commune with a population of just 200 is being touted as a modern Noah's Ark when doomsday arrives – supposedly less than nine months from now.


A rapidly increasing stream of New Age believers – or esoterics, as locals call them – have descended in their camper van-loads on the usually picturesque and tranquil Pyrenean village of Bugarach. They believe that when apocalypse strikes on 21 December this year, the aliens waiting in their spacecraft inside Pic de Bugarach will save all the humans near by and beam them off to the next age.

As the cataclysmic date – which, according to eschatological beliefs and predicted astrological alignments, concludes a 5,125-year cycle in the Mesoamerican Long Count calendar – nears, the goings-on around the peak have become more bizarre and ritualistic.