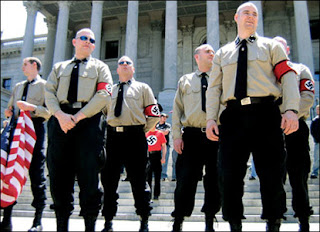 You mean as in makes you look like idiots?

He is vying for the Republican nomination for the post in a three-way race that will culminate in a May 15 primary, and a local party leader has likened his prospects at victory to the chances of "hearing a dying calf in a windstorm."

Local Republicans have expressed embarrassment by the bid, human rights groups are outraged, and others worry the run -- and the negative attention it garners -- will hamper efforts to dispel an image that the northern Idaho region is a haven for hate groups and extremists. "We haven't been able to shake that stereotype of white supremacists, and it's really unfortunate and unfair," said Janice Schoonover, co-owner of Western Pleasure Guest Ranch in the town of Sandpoint. "This just stirs the pot and makes us seem like something we're not."