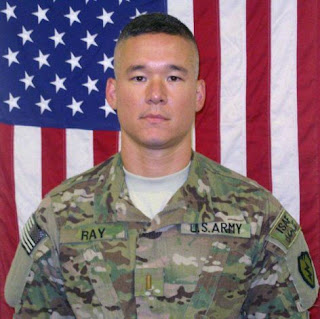 Rest in Peace Lt. Ray; and may your family be in peace.

Thank you Sir, for your service and may we never forget that freedom is ours because brave men and women such as yourself stand in harm's way for us.


Second Lt. Clovis T. Ray of Three Rivers died Thursday in Kunar province, Afghanistan, the Department of Defense confirmed Saturday. He was injured when insurgents attacked his unit with an improvised explosive device.

He leaves behind a wife, Shannon, and 5-year-old son, Dean Aaron Ray.

Ray, 34, gave up a lucrative career as an investment banker to join the Army, said his father, Bob Ray. He worked for Wells Fargo and Wachovia in San Antonio, where he lived for many years.