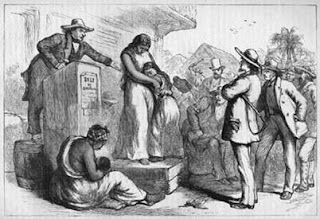 Folks never fail to amaze me.

Might as well have separated out the Jewish kids, force them to undress and have them take gas showers too.

By Steven G. Vegh - The Virginian-Pilot

NORFOLK
The principal of Sewells Point Elementary School has apologized to parents for a teacher's classroom exercise last week that cast her black and mixed-race fourth-graders as available for sale.

The apology came after the teacher separated the students from their white classmates and auctioned them, division spokeswoman Elizabeth Thiel Mather said. The exercise was part of an April 1 class on the Civil War.

In an April 6 letter sent to parents of students in the class, Principal Mary B. Wrushen wrote: "I recently became aware of a history lesson that was presented to the students in Ms. Jessica Boyle's fourth grade class. Although her actions were well intended to meet the instructional objectives, the activity presented was inappropriate for the students.

"The lesson could have been thought through more carefully, as to not offend her students or put them in an uncomfortable situation," Wrushen wrote.