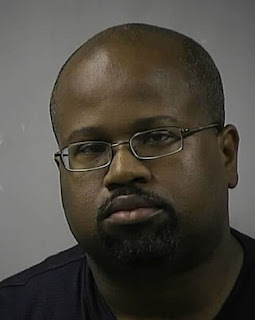 So the official drunk arrest total from the weekend is 164 DWI arrests!

That has got to be close to some sort of record.

When will folks like Mr. Sydney (pictured) realize their behavior is just plain stupid, wrong, dangerous to others and needs to stop?

Fiesta weekend sees 150-plus DWI arrests
In one case, police officer was hurt when his car was hit from behind.
By Eva Ruth Moravec - Express-News

A drunken-driving suspect rear-ended a police officer on the North Side early Monday, capping a weekend in which more than 150 motorists were charged with drinking and driving.

According to an incident report, Karl Sidney, 44, crashed into the back of Officer Joseph Flores Jr.'s patrol car about 2:10 a.m. on the southbound access road of U.S. 281 near Donella Drive.

Flores, 37, was taken to Stone Oak Methodist Hospital with minor injuries, police said. A member of the force for five years, he reportedly was on his way to a call for a wrong-way driver when the crash occurred.