Doc, I have these stabbing pains in my chest 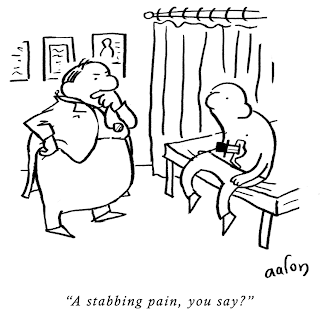 Stabbed in the chest and he wants a cigarette?

Lay off the cigs Buddy, they'll kill you, if you live long enough.

A homeless man taken to the hospital Saturday night in critical condition with a stab wound to the chest gave little information on his attacker, police said.

He simply told officers he wanted to smoke a last cigarette.

Investigators said the man, in his 50s, got into an argument with another homeless man behind a South Side insurance company in the 2100 block of Goliad Road. But he refused to cooperate with authorities, apparently saying nothing about the dispute and giving only a vague description of the man who stabbed him.