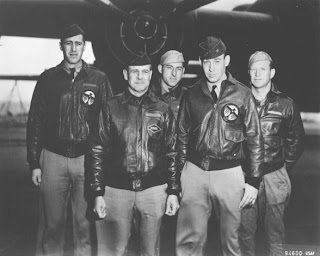 These men were heroes, in every sense that the word conveys.

(Lt. Col. Jimmy Doolittle was the pilot and Lt. Richard Cole, who now lives near Comfort, was the co-pilot of the lead plane on the Tokyo bombing mission early in World War II.) (U.S. Air Force photo)

It was America's fifth month in World War II, and the news everywhere was bad. Germany ruled Europe, and Japan was on the march in the Pacific.

Reeling from a string of defeats, America needed a quick victory, and a one-time flyweight boxer-turned-test pilot, Lt. Col. Jimmy Doolittle, was about to give it to them in a spectacular way.

“I don't think it was revenge,” said Dick Cole, who helped fly the first B-25B off the deck of the USS Hornet. “It was just tit for tat, I guess.”