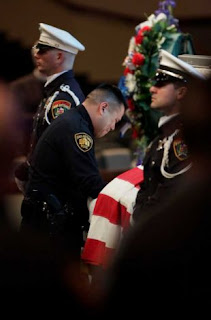 Perhaps its time to start yanking TABC licenses from establishments who over-serve?

Two local bars are under investigation by the Texas Alcoholic Beverage Commission for serving an amount of beer Police Chief William McManus says totaled nearly 2 gallons to the driver who died in a crash that also killed a police officer.

Christopher Baldaramos, 31, and Police Officer Stephanie Brown, 27, died in the head-on collision on Interstate 35 near McCullough Avenue three weeks ago. Baldaramos was driving the wrong way on the interstate.

Brown had been a police officer for three years and was responding to a call when the crash occurred. She left behind a 1-year-old daughter.