How about aspiring bezerker? or Incipient serial killer? 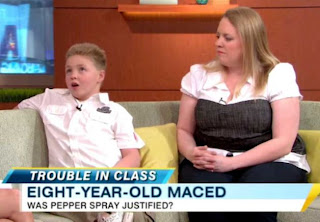 No.  A Misbehaving boy is someone pulling a girl's pigtails or cutting-up in class.

A boy threatening teachers and students with a sharpend stick is something else entirely.


"Aidan and his mother went on national talk shows on Wednesday to say using pepper spray on an unruly 8-year-old was too much."

He needs help, so does his mother.

DENVER (AP) — The staff at the Colorado elementary school said no one could calm 8-year-old Aidan Elliott.

He had just thrown a TV and chairs and was now trying to use a cart to bust through a door to an office where teachers had taken some young students for safety.

They called the police.

The officers found him with a foot-long piece of wood trim with a knife-like point in one hand and a cardboard box in the other.

When they couldn't calm him down, one squirted Aidan with pepper spray. He blocked it with the cardboard box.

A second squirt hit the youngster in the side of the head, and down he went, according to an account of the Feb. 22 standoff in a police report first obtained by KUSA-TV.