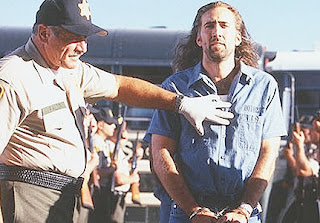 Maybe he wanted to horn in on Charlie Sheen's shtick?

You know, gather up some publicity?

NEW ORLEANS - Actor Nicolas Cage was arrested after he got drunk in the city's French Quarter and argued in the street with his wife over whether a house they were in front of was theirs, police said Saturday.

The couple was in front of a home that Cage insisted they were renting, police said. When she said it wasn't theirs, Cage grabbed her arm, according to a police news release.

Cage started hitting vehicles and tried to get into a taxi, police said. An officer saw that Cage was drunk and told him to get out of the cab. Cage then started yelling at the officer.