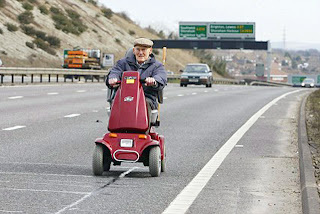 Can he be charged with the use of a deadly weapon?

FORT PIERCE, Fla., April 16 (UPI) -- A Florida man was arrested Saturday for "charging" a woman on a bicycle with his motorized chair, authorities say.

Harry Lee Gray, 67, was arrested after the victim complained this week to police in Fort Pierce, Fla., that Gray intentionally crashed into her leg, knocking her from the bike, Florida's TCPalm news outlet reported Saturday.

But Gray wasn't finished yet, according to the woman, who told police he then picked up the bicycle and slammed it to the ground.

The victim "stated that Gray has chased her for the last three days around the parking lot, but she never called the police," an affidavit states.

He is charged with misdemeanor battery and criminal mischief.